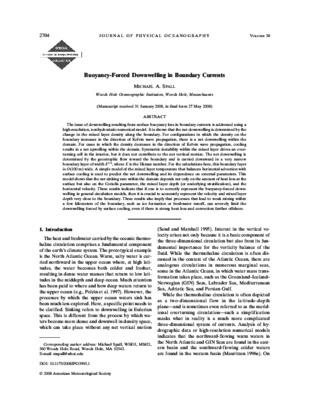 Author Posting. © American Meteorological Society, 2008. This article is posted here by permission of American Meteorological Society for personal use, not for redistribution. The definitive version was published in Journal of Physical Oceanography 38 (2008): 2704-2721, doi:10.1175/2008JPO3993.1.The issue of downwelling resulting from surface buoyancy loss in boundary currents is addressed using a high-resolution, nonhydrostatic numerical model. It is shown that the net downwelling is determined by the change in the mixed layer density along the boundary. For configurations in which the density on the boundary increases in the direction of Kelvin wave propagation, there is a net downwelling within the domain. For cases in which the density decreases in the direction of Kelvin wave propagation, cooling results in a net upwelling within the domain. Symmetric instability within the mixed layer drives an overturning cell in the interior, but it does not contribute to the net vertical motion. The net downwelling is determined by the geostrophic flow toward the boundary and is carried downward in a very narrow boundary layer of width E1/3, where E is the Ekman number. For the calculations here, this boundary layer is O(100 m) wide. A simple model of the mixed layer temperature that balances horizontal advection with surface cooling is used to predict the net downwelling and its dependence on external parameters. This model shows that the net sinking rate within the domain depends not only on the amount of heat loss at the surface but also on the Coriolis parameter, the mixed layer depth (or underlying stratification), and the horizontal velocity. These results indicate that if one is to correctly represent the buoyancy-forced downwelling in general circulation models, then it is crucial to accurately represent the velocity and mixed layer depth very close to the boundary. These results also imply that processes that lead to weak mixing within a few kilometers of the boundary, such as ice formation or freshwater runoff, can severely limit the downwelling forced by surface cooling, even if there is strong heat loss and convection farther offshore.This work was supported by NSF Grants OCE-0423975 and OCE-0726339