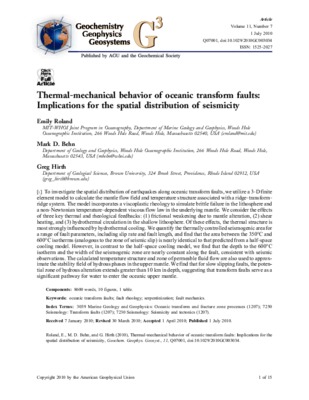 Thermal-mechanical behavior of oceanic transform faults : implications for the spatial distribution of seismicity

Author Posting. © American Geophysical Union, 2010. This article is posted here by permission of American Geophysical Union for personal use, not for redistribution. The definitive version was published in Geochemistry Geophysics Geosystems 11 (2010): Q07001, doi:10.1029/2010GC003034.To investigate the spatial distribution of earthquakes along oceanic transform faults, we utilize a 3-D finite element model to calculate the mantle flow field and temperature structure associated with a ridge-transform-ridge system. The model incorporates a viscoplastic rheology to simulate brittle failure in the lithosphere and a non-Newtonian temperature-dependent viscous flow law in the underlying mantle. We consider the effects of three key thermal and rheological feedbacks: (1) frictional weakening due to mantle alteration, (2) shear heating, and (3) hydrothermal circulation in the shallow lithosphere. Of these effects, the thermal structure is most strongly influenced by hydrothermal cooling. We quantify the thermally controlled seismogenic area for a range of fault parameters, including slip rate and fault length, and find that the area between the 350°C and 600°C isotherms (analogous to the zone of seismic slip) is nearly identical to that predicted from a half-space cooling model. However, in contrast to the half-space cooling model, we find that the depth to the 600°C isotherm and the width of the seismogenic zone are nearly constant along the fault, consistent with seismic observations. The calculated temperature structure and zone of permeable fluid flow are also used to approximate the stability field of hydrous phases in the upper mantle. We find that for slow slipping faults, the potential zone of hydrous alteration extends greater than 10 km in depth, suggesting that transform faults serve as a significant pathway for water to enter the oceanic upper mantle.The material presented here is based on work supported by the National Science Foundation Division of Ocean Sciences (OCE) grants 0623188 (M.B. and G.H.) and 0649103 (M.B.) and Division of Earth Sciences (EAR) grant 0814513 (G.H.)