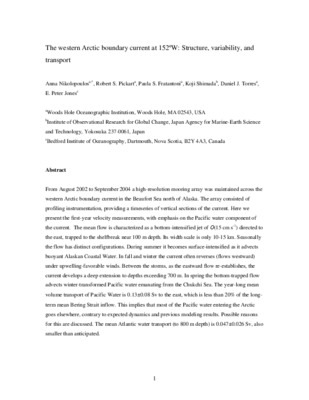 Author Posting. © The Author(s), 2008. This is the author's version of the work. It is posted here by permission of Elsevier B.V. for personal use, not for redistribution. The definitive version was published in Deep Sea Research Part II: Topical Studies in Oceanography 56 (2009): 1164-1181, doi:10.1016/j.dsr2.2008.10.014.From August 2002 to September 2004 a high-resolution mooring array was maintained across the western Arctic boundary current in the Beaufort Sea north of Alaska. The array consisted of profiling instrumentation, providing a timeseries of vertical sections of the current. Here we present the first-year velocity measurements, with emphasis on the Pacific water component of the current. The mean flow is characterized as a bottom-intensified jet of O(15 cm s-1) directed to the east, trapped to the shelfbreak near 100 m depth. Its width scale is only 10-15 km. Seasonally the flow has distinct configurations. During summer it becomes surface-intensified as it advects buoyant Alaskan Coastal Water. In fall and winter the current often reverses (flows westward) under upwelling-favorable winds. Between the storms, as the eastward flow re-establishes, the current develops a deep extension to depths exceeding 700 m. In spring the bottom-trapped flow advects winter-transformed Pacific water emanating from the Chukchi Sea. The year-long mean volume transport of Pacific Water is 0.13±0.08 Sv to the east, which is less than 20% of the long-term mean Bering Strait inflow. This implies that most of the Pacific water entering the Arctic goes elsewhere, contrary to expected dynamics and previous modeling results. Possible reasons for this are discussed. The mean Atlantic water transport (to 800 m depth) is 0.047±0.026 Sv, also smaller than anticipated.AN was funded by the Swedish Research Council; RP, PF, and DT were funded by grant N00014-02-1-0317 of the Office of Naval Research