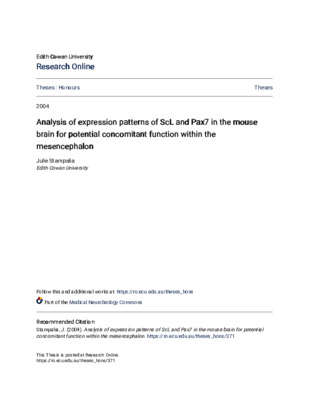 By Julie Stampalia
Get PDF (5 MB)

Investigation of the cascade of events that leads to brain formation during embryogenesis allows an understanding of the processes involved that may well be applicable to future neurodegenerative therapies. Two genes at work during embryonic neurogenesis in a brain region called the superior colliculus are Scl, a member of the basic helix-loop-helix factor transcription factor family and Pax7, a paired box transcription factor containing a homeobox dornain. The superior coiliculus forms part of the visual system in mammals and in sepmate studies both the Scl and Pax7 genes have been shown to be present in this region of the mouse brain from early neurogenesis onwards continuing into adulthood. This study was undertaken to ascertain whether both genes were operating within the same cells suggesting that they may be part of the same cascade of gene regulatory events during development or co-function in cells of the mature superior colliculus. Mice were analysed at seven different timepoints from embryonic day (E) 12.5, El5.5, El8.5 to the day of birth, postnatal day (P) 5, at weaning (P21) and in the adult brain. Their dissected brains were cryosectionced and processed for (immuno)histochemistry. Preliminary results were generated with LacZ staining to detect Scl expression and immunoperoxidase staining to detect Pax7. Confocal microscopy of (immune )fluorescent stained sections confirmed co-expression. Interestingly, expression of the Sc1 and Pax7 transcription factors was found to overlap in a large subset of Pax7 and Scl positive cells in the superficial layers of the mature superior colliculus and co-localisation in these cells was confirmed. By contrast, Pax7 and Scl did not co-localise in these cells during embryonic neurogenesis. Compared with a range of neurogenic transcription factors that are down-regulated after embryonic neurogenesis, the continued expression of Scl and Pax7 in the adult brain suggests a possible change in function from neuronal differentiation before birth to a possible concomitant maintenance of the cellular phenotype function in the adult brain. The lack of co-expression in the embryonic brain does not support the hypothesis that Pax7 and Scl are involved in the same developmental cascade of gene regulation. However, the finding that Pax7 and Scl co-localise in mature neurons of the superior colliculus does allow for co-function of these two transcription factors