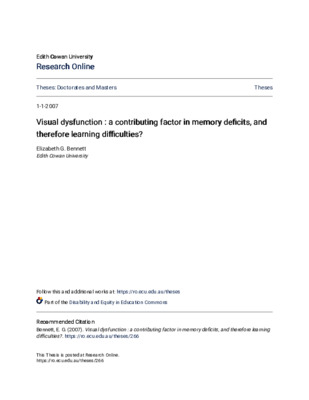 This thesis is based on Educational Therapy (ET) practice which has found eye muscle imbalance is a key factor to be addressed in management of learning difficulties (LD). This level of oculo-motor (o-m) function is a \u27hidden\u27 handicap as individuals are unaware of the problem; it is not routinely tested; and is not generally included in learning difficulties research. O-m function is omitted in standard paediatric optometry tests, and in school vision screening. Eye exercises increase the range of binocular fields of vision by employing stereopsis glasses and red/green slides. Central vision loss was uncovered when students reported words, seen by only the right eye, disappear or switch on and off . When the left eye was covered, right eye vision returned but was lost again with binocular vision, even though larger shapes on the screen remained complete. In effect, global vision was unaffected while right eye central (foveal) vision was suppressed. This is considered significant because students attending ET have learning difficulties with phonemic memory, spelling and reading deficits, which are predominantly left hemisphere processes. The aim of this three-part study, consisting of School Survey, ET Intervention study and Case studies, was to: a) determine whether o-m dysfunction was found in a girls\u27 school population and/or was associated with LD; b) set up an Intervention study to explore the effects of vision training on the outcomes of a subsequent week-long word-skills programme in the ET practice. Two case studies we\u27re also examined, that of matched senior school boys whose outcomes were significantly different; and c) examine more closely the common pattern of muscle imbalance in two case studies of current junior school students. This tested the therapy assumption that mal-adaptive sensory feedback was contributing to o-m dysfunction. This notion is based on the Luria (1973) Model of Levels of Neural Function which provides the framework for ET practice, and the Developmental Model of LD that has evolved in application and explanation. Part 1 School Survey. This exploratory, cross-sectional study included a randomised sample of 277 participants in a private girl\u27s school. A 7-10 minute screening was provided by five optometrists, with an expanded protocol including o-m function. Also assessed were academic standards of reading comprehension and spelling, reasoning, visual perception, phonological skills, auditory, visual and phonemic memory, and arm dominance. Results showed visual dysfunction and mixed eye dominance in approximately equal numbers. Of the 47% girls with visual dysfunction, not all had literacy problems; however, LD students had corresponding degrees of o-m dysfunction, memory deficit and mixed hand / arm dominance. Part 2 Intervention study. The Research Question for the Intervention Study was: Does the difference in learning standards depend on which eye is disadvantaged in the case of weak binocularity? This question was answered by determining the outcomes to literacy levels once normal binocular o-m function and stable eye dominance were established. Twenty-four students (6 to 18 years) had Behavioural Optometry assessment prior to commencing therapy and were found to have o-m dysfunction, undetected by previous standard optometry tests. Eye exercise results showed 62.5% of the group had changed from left to right eye dominance. The dominance criterion was set by this group, indicated by the right eye holding fixation through full range of fusional reserves (binocular overlap), together with superior eye-tracking speed \u3e20% by the right, compared to the left, eye. Associated significant gains in literacy and phonemic memory were also achieved by the newly established \u27right-eyed\u27 group. In spite of undergoing identical treatment, the \u27left-eyed\u27 group retained limited foveal binocularity, and made less progress in literacy outcomes. Part 3 Two current Case Studies. Present ET practice benefited from insights gained from the 36% \u27unsuccessful\u27 participants of the previous study. Better therapy outcomes are achieved from an integrative motor-sensory approach, supported by Podiatry and Cranial Osteopathy. This detailed study involved two junior school boys who exemplified a common pattern of physical anomalies. For example, RW (8-year old male) had \u27minimal brain damage\u27 and LD that co-occur with unstable feet and o-m control, postural muscle imbalance, poor balance, motor co-ordination and dyspraxia. After 18, two-hour therapy sessions over nine months, he is now reading well, his motor co-ordination, eye tracking and writing are within the ‘low normal range’, and he is interacting competently with his peers. Learning difficulties can be conceptualised as a profile of immaturities. The results of this three part study have shown that once the \u27hidden\u27 handicap of right eye suppression is overcome with balanced binocular fields of vision, learning difficulties arc ameliorated. This is affirmed by the positive gains achieved by these students, not only in literacy skills but also \u27outgrowing\u27 immaturity in motor-sensory-perceptual development