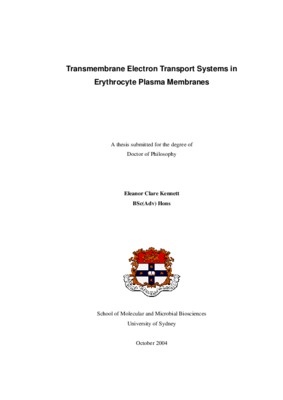 By Eleanor Kennett
Get PDF (3 MB)

Electron transport systems exist in the plasma membranes of all cells. Although not well characterised they play roles in cell growth and proliferation, hormone responses and other cell signalling events, but perhaps their most important role, especially in erythrocytes, is enabling the cell to respond to changes in both intra- and extracellular redox environments. Human erythrocytes possess a transmembrane electron transport capability that mediates the transfer of reducing equivalents from reduced intracellular species to oxidised extracellular species and is concomitant with proton extrusion. In the work for this thesis I showed that erythrocyte membranes contain a transmembrane WST-1 (water soluble tetrazolium-1) reductase activity that uses reducing equivalents from intracellular NADH to reduce extracellular WST-1. The rate of WST-1 reduction was increased by the presence of phenazine methosulfate and, although of low activity, it showed similar properties to a previously reported transmembrane NADH-oxidase activity. 1H NMR experiments showed that WST-1 was reversibly bound to the membrane and/or proteins in the membrane within the timeframe of the NMR experiment, confirming the location of the WST-1 reduction. Preliminary attempts to purify NADH:WST-1 reductase and NADH:ferricyanide reductase activities from the erythrocyte plasma membrane were inconclusive. The protein(s) responsible for the reduction of these oxidants appear to be of low abundance in the plasma membrane and may be part of a larger protein complex. Further work on the isolation of these redox activities is required before the protein(s) involved can be identified with any confidence. The ability of cells to export electrons suggests that an electron import mechanism might also exist to re-establish the cell's redox-buffering equilibrium under conditions of oxidative stress. This hypothesis was tested in glucose-deprived erythrocytes using reduced glutathione and NADH as extracellular electron donors. It was shown that neither reduced glutathione nor NADH donated reducing equivalents through a transmembrane redox system. Extracellular NADH was, however, able to produce profound changes in starvation metabolism and methaemoglobin reduction rates. The addition of extracellular NADH caused a six-fold increase in the rate of lactate production above that observed in glucose-starved controls, together with a concomitant decrease in pyruvate production. In erythrocytes containing high levels of methaemoglobin, extracellular NADH increased the rate of methaemoglobin reduction in both the presence and absence of glucose. These results were explained by the leakage of lactate dehydrogenase from erythrocytes due to an admittedly low level of haemolysis. This caused the displacement of the intracellular pseudo-equilibrium of the lactate dehydrogenase reaction via transmembrane exchange of lactate, allowing the conversion of extracellular pyruvate to lactate and resulted in an increase in intracellular NADH concentrations. The latter increased the rate of methaemoglobin reduction. In conclusion, the work described in this thesis showed that erythrocyte membranes do not contain mechanisms for importing electrons or reducing equivalents from extracellular reduced glutathione or NADH. Erythrocytes do, however, contain an electron export system which can reduce extracellular oxidants such as WST-1 and the activity of this system depends on an intricate balance between intracellular antioxidants and enzyme activities. There is much still to be learnt about plasma membrane redox systems, little is known, for example, about the protein composition, mechanism of action, and the in vivo conditions under which these systems are most active