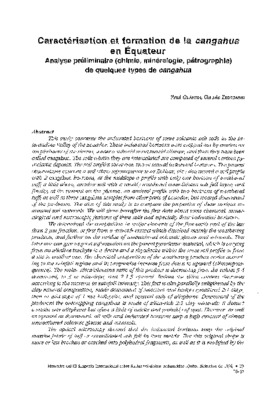 By Paul Quantin and Claude Zebrowski
Get PDF (2 MB)

This study concerns the indurated horizons of some volcanic ash soils in the Interandine Valley of the Ecuador. These indurated horizons were cropped out by erosion on the piedmont of the sierras, under a subarid to subhumid climate, and then they have been called cangahua. The soils within they are intercalated are composed of several various pyroclastic deposits. The soil profiles show one, two or several indurated horizons. The present observations concern a soil climo-toposequence near Bolivar, viz: downward a soil profile with 2 cangahua horizons; at the midslope a profile with only one horizon of weathered tuff; a little above, another soil with a weakly weathered consolidated ash fall layer; and finally, at the summit on the paramo, an andosol profile with two horizons of weathered tuff; as well as three cangahua samples from other parts of Ecuador, but located downward of the piedmont. The aim of this study is to compare the properties of these various indurated soil materials. We will show hereafter the first data about some chemical, mineralogical and microscopic features of these soils and especially their indurated horizons. We determined the composition in major elements of the fine earth and of the less than 2 um fraction, at first from a "triacid" extract which dissolved mainly the weathering products, and further on the residue of unweathered volcanic glasses and minerals. This later one can give us good information on the parent pyroclastic material, which is varying from an alkaline trachyte to a dacite and a rhyodacite within the same soil profile or from a site to another one. The chemical composition of the weathering product varies according to ther ainfall regime and its progressive increase from down to upward (climotoposequence). The molar silica/alumina ratio of this product is decreasing from the values 5-4 downward, to 3 at mid-slope, and 2-1.5 upward. Indeed the silica content decreases according to the increase in rainfall intensity. This fact is also parallelly enlighthened by the clay mineral composition, made downward of smectites and badly crystallized 2:1 clays, the a mid-slope of 1 nm hallosyte, and upward only of allophane. Downward of the piedmont the outcropping cangahua is made of silica-rich 2:1 clay minerals; it doesn't contain any allophane but often a little of calcite and probably os opal. However, as well as upward as downward, all soils and indurated horizons keep a high amount of almost unweathered volcanic glasses and minerals