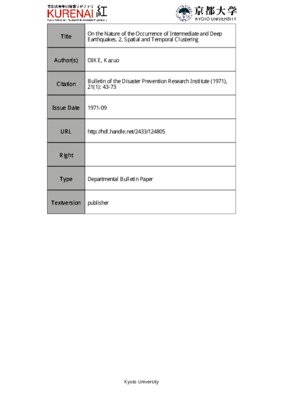 On the Nature of the Occurrence of Intermediate and Deep Earthquakes. 2. Spatial and Temporal Clustering

Spatial and temporal clustering of intermediate and deep earthquakes have been studied from data of the location, depth, origin time and magnitude of earthquakes deeper than 100 km. Multiplets frequently occur in the intermediate zone of the South Sandwich Islands, Colombia, the West Indies, the Aleutian Islands, Celebes Island, the Banda Sea, New Hebrides and the Hindu-Kush regions and in the deep zones of South America, Java-Banda Sea, Santa Cruz and the Fiji Islands region. These regions are characterized by the bending or the contortion of the descending lithosphere. In contrast, they are scarcely found in Central America, the Kuril Islands, Japan, Mariana or the Ryukyu Islands. Hypocenters of shocks of each multiplet distribute on a long and slender plane in space. The largest shock in a multiplet is located at the extremity of the plane in almost all cases. Moreover, the shocks of each multiplet which occur in an area show the characteristic directional distribution. These distributions are strongly related to the distribution of the directions of the principal axes of stresses in the concerned regions. On the analogy of the mechanism of the aftershock occurrence of shallow earthquakes, these characteristics of multiplets mean that small shocks of a multiplet are generated by the local concentration of the stress energy which is produced by the occurrence of a main fault plane of the largest shock. From the time sequence of each multiplet it is found that there are some cases in which the largest shock occurs at the beginning of the series, that is, the aftershock type, but in many cases the multiplet type sequences are found. In cases of large shallow earthquakes a clear pattern of a main shock-aftershock sequence is generally found. This difference between the time sequence of shallow earthquakes and intermediate and deep earthquakes seems to be the reflection of the different physical conditions between the shallow zones and the deeper zones