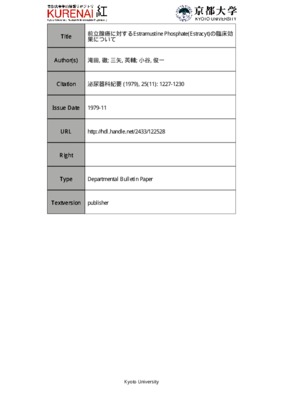 1) Estramustine phosphate (Estracyt) was administrated to 10 prostatic cancer patients consisting of five fresh cases and five cases resistant to the hormone therapy and its therapeutic effect was judged with the course of the subjective and objective findings after 3 months' administration. The daily dose of Estracyt was three to six capsules. 2) Though there was some difference in degree, subjective symptoms of prostatic cancer were lessened in all patients. 3) In the objective signs, the decrease in the amount of residual urine, softening of the prostate and normalization of acid phosphatase level were observed in nearly all patients. Except these signs, there were no improved signs which were common to all patients. The improvement of bone scintillation findings and obstructive renal insufficiency were observed each in one patient. 4) Of the adverse reactions, gastrointestinal disturbances and gynecomastia were main reactions, but the serious adverse reactions such as the depression of bone marrow and disturbance of liver function were observed in none of the patients