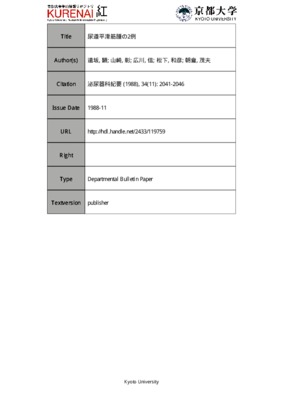 Two cases of urethral leiomyoma are reported. Two Japanese women 39 and 28 years old presented with the complaint of a painless mass protruding from the anterior wall of urethra to urethral meatus. The mass was firm with associated condyloma acuminatum on its surface and was easily removed by surgical excision. Sixty-four cases of urethral leiomyoma have been reported in Japan before the present cases. The majority of them were in females. The peak of incidence was in the 30th to 40th decade, suggesting the relationship of urethral leiomyoma to female sex hormones. No malignant development has been described. Judging from these findings, it appears possible to differentiate leiomyoma of urethra from caruncle, urethral prolapse or urethral carcinoma by careful inspection and palpation of a mobile firm mass under epithelium