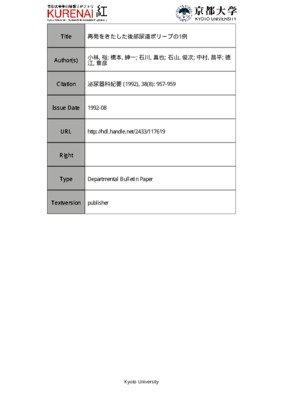 A 38-year-old man was admitted to our hospital complaining of difficult, frequent urination to our hospital. Transrectal echography and digital examination showed chronic prostatitis. He was treated with medication for chronic prostatitis but his condition did not improve. Retrograde urethrography revealed an obstructive change in the prostatic urethra and urethroscopic findings showed a urethral tumor in the posterior urethra. Transurethral resection of the tumor was performed. Pathological diagnosis of the urethral tumor indicated a urethral caruncle. After one year, the patient was readmitted to our hospital with the same complaints as before. Urethroscopic findings revealed the recurrence of a urethral polyp in the posterior urethra. Transurethral resection of the polyp was performed. Pathological findings revealed that the inner structure of the polyp showed a prostatic glandular pattern that after staining with anti-prostatic acid phosphatase antibody. The final diagnosis was that the polyp had a prostatic-type epithelium in the prostatic urethra