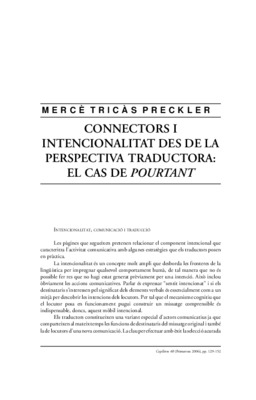 The article sets out to relate the intentional element of discursive activity with some translating strategies, starting on the basis that the translated text, which is subjected to the demands of a prior communicative act, is a good tool to highlight both the intentional capacity of some linguistic resources and their constraints. Many grammatical forms have an important role, as much or more than the one associated with lexical elements in the creation of this purpose. As a consequence, this paper is based on the analysis of the translation of the French connector pourtant into Catalan and Spanish in a corpus of literary texts and its respective translations. Particularly, it focuses on those ones which, despite their correctness at formal level, have discarded intentional aspects, so they have given rise to an eroded translation from the communicative point of view. At the same time, this work can be used to discover some semantic-pragmatic nuances attached to the connector pourtant that are more difficult to notice from a monolingual perspective