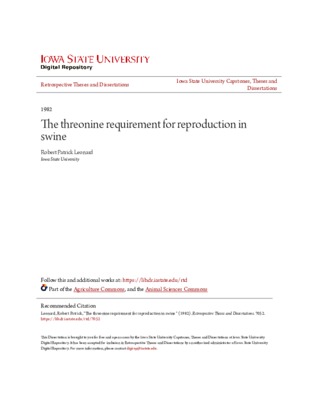 The threonine requirement for reproduction in swine

L-threonine was added to a fortified corn-gelatin diet to attain theonine levels of 3.59, 4.95, 6.31, 7.67 and 9.03 g per day. These diets were fed to twenty-five crossbred gilts at a rate of 1.82 kg per day before mating and during 3 successive pregnancies. During lactation, all animals received the same diet which contained 0.35% theonine. Litter size and feed intake were standardized during both lactations;Five day nitrogen balance trials were initiated on the 45th and 90th day of pregnancy. Increasing the dietary threonine resulted in a significant difference in nitrogen retention, with maximum retention occurring when 4.95 g of threonine were fed. After each balance trial blood samples were drawn before and following feeding. The lowest level of plasma urea nitrogen occurred when 4.95 g of threonine were fed. As threonine intake increased, plasma threonine increased linearly (P \u3c .005) and quadratically (P \u3c .05) with the response curve inflection at 4.95 g. This increase in plasma threonine was accompanied by a significant linear (P \u3c .01) and quadratic (P \u3c .005) decrease in fasted plasma lysine and a significant linear (P \u3c .05) increase in the liver sample activities of lysine\u27s catabolic enzyme, lysine-(alpha)-ketoglutarate reductase;Sow weight gains increased linearly (P \u3c .01) and quadratically (P \u3c .01) with increasing theronine levels. Maximum gestation gains occurred when 6.31 g of threonine were fed, while maximum gains for the entire experiment occurred when 7.67 g were fed;Litter weight, number of pigs born, baby pig gains, daily milk yield and milk protein were not significantly influenced by threonine levels;All sows were slaughtered at 27 (+OR-) 4 days of the third gestation period. There were no significant differences in live weight, hot carcass weight, loin eye area, carcass backfat and percent muscle;The changes in metabolic criteria lead to the conclusion that a daily intake of 4.95 g of L-threonine meets the requirement for reproduction;If it is assumed that the added L-threonine was 100% digestible and that only 75.0% of the threonine present in a typical corn-soybean meal diet is absorbed by the sow, then 5.4 g of threonine per day when supplied by these feedstuffs would meet the requirement for reproduction