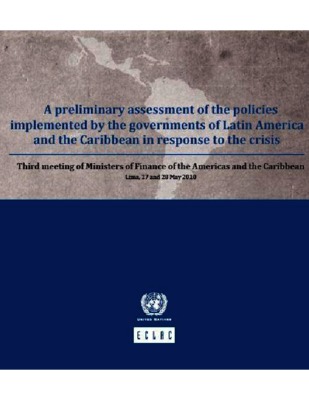 Includes bibliographyThis document was prepared by the Economic Commission for Latin America and the Caribbean (ECLAC); at the request of the Ministry of Economic and Financial Affairs of Peru, to be presented at the third meeting of Ministers of Finance of the Americas and the Caribbean, with a view to assessing the policies implemented by the governments of the region in response to the international crisis.The macroeconomic stability shown by most Latin American and Caribbean countries during the years preceding the international crisis marked a significant change compared with the customary financial problems experienced in the course of similar episodes in the region during its recent history. The exceptional period of buoyancy in the world economy and in international finance enabled these countries to strengthen public accounts, reduce and improve their debt profile and build up their international reserves, something they had not previously been able to do. This gave governments leeway to implement unprecedentedly active government policies, designed to counteract the negative impact of the deterioration in international conditions. Broadly speaking, these measures can be divided into those intended to restore confidence and make financial markets operational and those intended to bolster aggregate demand and the capacity to create jobs.At first, the central banks tried to restore liquidity to allow the normal functioning of domestic credit markets. The low level of monetization, however, and the shallowness of the region's financial markets, together with the uncertainty that reigned in the financial sphere from the end of 2008 onwards and for a good part of 2009, limited the impact of these measures on the level of economic activity. In some cases, efforts were made to offset the slack credit supply through a more active rote for public banks, a tool whose effectiveness depends on the importance of credit in the economy and the public banks' share of total lending, which means that it is restricted to only a few countriesMore generally, and as of the first quarter of 2009 in particular, countries announced and gradually implemented a strategy based on increasing the fiscal stimulus, sometimes through a temporary and selective tax reduction and sometimes by raising government spending. In particular, there was an increase in current expenditure, usually associated with an increase in direct transfers, even though in some cases there was also an increase in capital expenditure, which will extend beyond the 2009 fiscal year.This brief document aims to provide an evaluation of the impact of the measures taken by the countries in the region to offset the impact of the crisis. It is not intended to compare the effectiveness of the various strategies adopted, but to give a synthesis of the information available so as to gain an idea of the scope of the efforts made by countries and the similarities and differences in approaches in the various instruments used. As such, it is a prelude to a more complex exercise, bearing in mind the problems involved in evaluating the impact of measures that are different in terms of features and scope, that are applied in combination with other measures, and whose effects, moreover, depend on the very different situations in which they were applied. Tables 1 to 4 in the next section give an overview of the measures taken by groups of Latin American and Caribbean countries in the following five categories:• Monetary policy - Monetary policy rates- Expansion of primary liquidity• Financing from public banks• Fiscal policy - Tax cuts- Variation in spending• Exchange-rate and foreign trade policy• Labour policies Regarding the impact of the measures, section C includes and comments on tables and charges showing the quarterly trend in the GDP and employment and annual inflation rates. This section mentions the special features of the rapid recovery which, in general, is being shown by the region's economies, underlining the importance of government policies both in sustaining demand and in creating jobs.The document ends with a section that analyses the challenges which, going beyond the short term, show the need to transform this recovery into renewed sustained growth as a necessary condition for remedying the region's endemic ills of poverty and inequality. ECLAC offers this document as a contribution to the public policy debate geared towards assisting the governments of the region in rising to the constant challenge of achieving inclusive and sustainable development