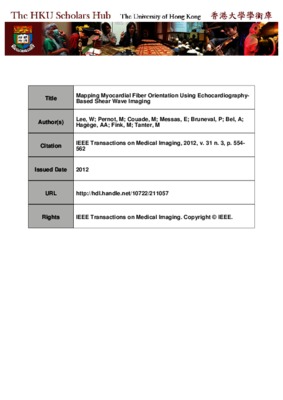 The assessment of disrupted myocardial fiber arrangement may help to understand and diagnose hypertrophic or ischemic cardiomyopathy. We hereby proposed and developed shear wave imaging (SWI), which is an echocardiography-based, noninvasive, real-time, and easy-to-use technique, to map myofiber orientation. Five in vitro porcine and three in vivo open-chest ovine hearts were studied. Known in physics, shear wave propagates faster along than across the fiber direction. SWI is a technique that can generate shear waves travelling in different directions with respect to each myocardial layer. SWI further analyzed the shear wave velocity across the entire left-ventricular (LV) myocardial thickness, ranging between 10 (diastole) and 25 mm (systole), with a resolution of 0.2 mm in the middle segment of the LV anterior wall region. The fiber angle at each myocardial layer was thus estimated by finding the maximum shear wave speed. In the in vitro porcine myocardium (n=5), the SWI-estimated fiber angles gradually changed from +80° ± 7° (endocardium) to +30° ± 13° (midwall) and-40° ± 10° (epicardium) with 0° aligning with the circumference of the heart. This transmural fiber orientation was well correlated with histology findings (r2=0.91± 0.02, p<0.0001). SWI further succeeded in mapping the transmural fiber orientation in three beating ovine hearts in vivo. At midsystole, the average fiber orientation exhibited 71° ± 13° (endocardium), 27° ± 8° (midwall), and-26° ± 30° (epicardium). We demonstrated the capability of SWI in mapping myocardial fiber orientation in vitro and in vivo. SWI may serve as a new tool for the noninvasive characterization of myocardial fiber structure. © 2012 IEEE.published_or_final_versio