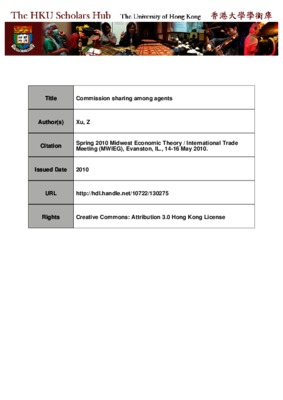 Session 4: Contract Theory 2When a principal hires an agent to create a result, she would like to motivate the agent to pay effort to increase the probability of a good fit with her own characteristics. However, an outcome that does not fit this principal may fit another, so her agent might have an incentive to divert a result to another principal through that principal's contracted agent. This is commonly achieved in practice through a fee-sharing arrangement among the agents. This paper studies how such result-diverting and fee-sharing arrangement affect the agents' incentive to exert efforts and the principals' incentive when offering contracts. We show that, under fee-sharing arrangement, a contract signed between a principal and her agent is able to influence the future transfers among the agents when they bargain, so each principal has incentive to lower her commission (the reward for a good _t) to reduce the outflows of surplus to other principals. Also, the ability of the commission to motivate effort in an agent decreases when fee-sharing is allowed. These two effects together lower the equilibrium effort levels compared to the benchmarks where fee-sharing is not possible. As a result, efficiency is improved as the agents' efforts would have been wastefully high in the absence of fee-sharing.postprin