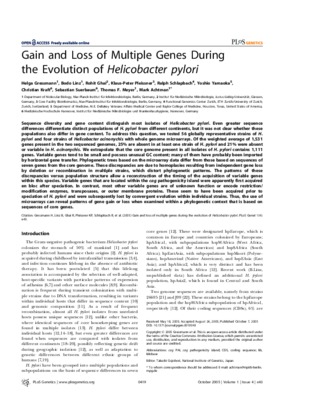 Sequence diversity and gene content distinguish most isolates of Helicobacter pylori. Even greater sequence differences differentiate distinct populations of H. pylori from different continents, but it was not clear whether these populations also differ in gene content. To address this question, we tested 56 globally representative strains of H. pylori and four strains of Helicobacter acinonychis with whole genome microarrays. Of the weighted average of 1,531 genes present in the two sequenced genomes, 25% are absent in at least one strain of H. pylori and 21% were absent or variable in H. acinonychis. We extrapolate that the core genome present in all isolates of H. pylori contains 1,111 genes. Variable genes tend to be small and possess unusual GC content; many of them have probably been imported by horizontal gene transfer. Phylogenetic trees based on the microarray data differ from those based on sequences of seven genes from the core genome. These discrepancies are due to homoplasies resulting from independent gene loss by deletion or recombination in multiple strains, which distort phylogenetic patterns. The patterns of these discrepancies versus population structure allow a reconstruction of the timing of the acquisition of variable genes within this species. Variable genes that are located within the cag pathogenicity island were apparently first acquired en bloc after speciation. In contrast, most other variable genes are of unknown function or encode restriction/modification enzymes, transposases, or outer membrane proteins. These seem to have been acquired prior to speciation of H. pylori and were subsequently lost by convergent evolution within individual strains. Thus, the use of microarrays can reveal patterns of gene gain or loss when examined within a phylogenetic context that is based on sequences of core genes