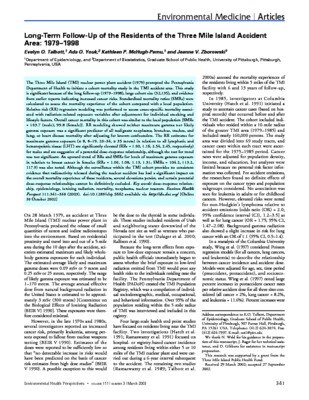 Long-term follow-up of the residents of the Three Mile Island accident area: 1979-1998.

The Three Mile Island (TMI) nuclear power plant accident (1979) prompted the Pennsylvania Department of Health to initiate a cohort mortality study in the TMI accident area. This study is significant because of the long follow-up (1979-1998), large cohort size (32,135), and evidence from earlier reports indicating increased cancer risks. Standardized mortality ratios (SMRs) were calculated to assess the mortality experience of the cohort compared with a local population. Relative risk (RR) regression modeling was performed to assess cause-specific mortality associated with radiation-related exposure variables after adjustment for individual smoking and lifestyle factors. Overall cancer mortality in this cohort was similar to the local population [SMRs = 103.7 (male); 99.8 (female)]. RR modeling showed neither maximum gamma nor likely gamma exposure was a significant predictor of all malignant neoplasms; bronchus, trachea, and lung; or heart disease mortality after adjusting for known confounders. The RR estimates for maximum gamma exposure (less than or equal to 8, 8-19, 20-34, greater than or equal to 35 mrem) in relation to all lymphatic and hematopoietic tissue (LHT) are significantly elevated (RRs = 1.00, 1.16, 2.54, 2.45, respectively) for males and are suggestive of a potential dose-response relationship, although the test for trend was not significant. An upward trend of RRs and SMRs for levels of maximum gamma exposure in relation to breast cancer in females (RRs = 1.00, 1.08, 1.13, 1.31; SMRs = 104.2, 113.2, 117.9) was also noted. Although the surveillance within the TMI cohort provides no consistent evidence that radioactivity released during the nuclear accident has had a significant impact on the overall mortality experience of these residents, several elevations persist, and certain potential dose-response relationships cannot be definitively excluded