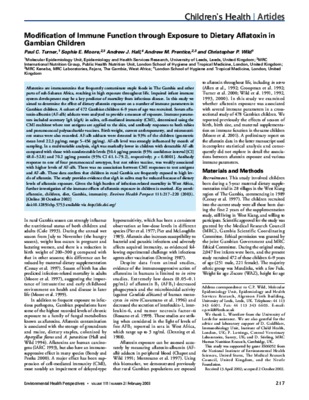 Modification of immune function through exposure to dietary aflatoxin in Gambian children.

Aflatoxins are immunotoxins that frequently contaminate staple foods in The Gambia and other parts of sub-Saharan Africa, resulting in high exposure throughout life. Impaired infant immune system development may be a key predictor of mortality from infectious disease. In this study we aimed to determine the effect of dietary aflatoxin exposure on a number of immune parameters in Gambian children. A cohort of 472 Gambian children 6-9 years of age was recruited. Serum aflatoxin-albumin (AF-alb) adducts were analyzed to provide a measure of exposure. Immune parameters included secretory IgA (sIgA) in saliva, cell-mediated immunity (CMI), determined using the CMI multitest where test antigens are applied to the skin, and antibody responses to both rabies and pneumococcal polysaccharide vaccines. Birth weight, current anthropometry, and micronutrient status were also recorded. AF-alb adducts were detected in 93% of the children (geometric mean level 22.3 pg/mg; range 5-456 pg/mg). AF-alb level was strongly influenced by month of sampling. In a multivariable analysis, sIgA was markedly lower in children with detectable AF-alb compared with those with nondetectable levels [50.4 micro g/mg protein (95% confidence interval [CI] 48.0-52.8) and 70.2 micro g/mg protein (95% CI 61.1-79.2), respectively; p < 0.0001]. Antibody response to one of four pneumococcal serotypes, but not rabies vaccine, was weakly associated with higher levels of AF-alb. There was no association between CMI responses to test antigens and AF-alb. These data confirm that children in rural Gambia are frequently exposed to high levels of aflatoxin. The study provides evidence that sIgA in saliva may be reduced because of dietary levels of aflatoxin exposure. Given the high burden of infection-related mortality in West Africa, further investigation of the immune effects of aflatoxin exposure in children is merited