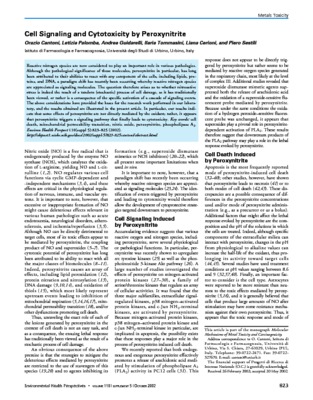 Cell signaling and cytotoxicity by peroxynitrite.

Reactive nitrogen species are now considered to play an important role in various pathologies. Although the pathological significance of these molecules, peroxynitrite in particular, has long been attributed to their abilities to react with any component of the cells, including lipids, proteins, and DNA, a paradigm shift has recently been occurring whereby reactive nitrogen species are appreciated as signaling molecules. The question therefore arises as to whether nitrosative stress is indeed the result of a random (stochastic) process of cell damage, as it has traditionally been viewed, or rather is a consequence of the specific activation of a cascade of signaling events. The above considerations have provided the bases for the research work performed in our laboratory, and the results obtained are illustrated in the present article. In particular, our results indicate that some effects of peroxynitrite are not directly mediated by the oxidant; rather, it appears that peroxynitrite triggers a signaling pathway that finally leads to cytotoxicity