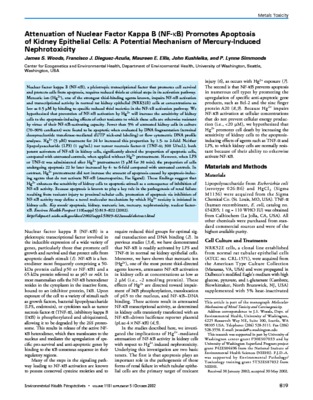 Nuclear factor kappa B (NF-kappaB), a pleiotropic transcriptional factor that promotes cell survival and protects cells from apoptosis, requires reduced thiols at critical steps in its activation pathway. Mercuric ion (Hg(2+)), one of the strongest thiol-binding agents known, impairs NF-kappaB activation and transcriptional activity in normal rat kidney epithelial (NRK52E) cells at concentrations as low as 0.5 microM by binding to specific reduced thiol moieties in the NF-kappaB activation pathway. We hypothesized that prevention of NF-kappaB activation by Hg(2+) will increase the sensitivity of kidney cells to the apoptosis-inducing effects of other toxicants to which these cells are otherwise resistant by virtue of their NF-kappaB-activating capacity. Fewer than 5% of untreated kidney cells in culture (70-90% confluent) were found to be apoptotic when evaluated by DNA fragmentation (terminal deoxynucleotide transferase-mediated dUTP nick-end labeling) or flow cytometric DNA profile analyses. Hg(2+) (5 microM) treatment for 24 hr increased this proportion by 1.5- to 2-fold. Neither lipopolysaccharide (LPS) (1 microg/mL) nor tumor necrosis factor-alpha (TNF-alpha; 300 U/mL), both potent activators of NF-kappaB in kidney cells, significantly altered the proportion of apoptotic cells, compared with untreated controls, when applied without Hg(2+) pretreatment. However, when LPS or TNF-alpha was administered after Hg(2+) pretreatment (5 microM for 30 min), the proportion of cells undergoing apoptosis 22 hr later increased by 4- to 6-fold compared with untreated controls. In contrast, Hg(2+) pretreatment did not increase the amount of apoptosis caused by apoptosis-inducing agents that do not activate NF-kappaB (staurosporine, Fas ligand). These findings suggest that Hg(2+) enhances the sensitivity of kidney cells to apoptotic stimuli as a consequence of inhibition of NF-kappaB activity. Because apoptosis is known to play a key role in the pathogenesis of renal failure resulting from toxicant injury to proximal tubular cells, promotion of apoptosis via inhibition of NF-kappaB activity may define a novel molecular mechanism by which Hg(2+) toxicity is initiated in kidney cells