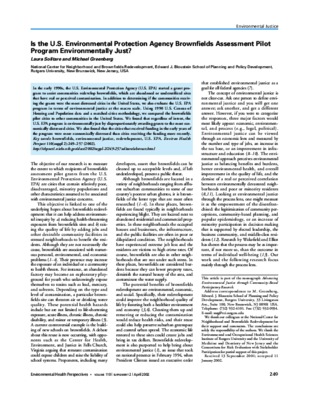 By Laura Solitare and Micheal Greenberg
Get PDF (954 KB)

In the early 1990s, the U.S. Environmental Protection Agency (U.S. EPA) started a grant program to assist communities redevelop brownfields, which are abandoned or underutilized sites that have real or perceived contamination. In addition to determining if the communities receiving the grants were the most distressed cities in the United States, we also evaluate the U.S. EPA program in terms of environmental justice at the macro scale. Using 1990 U.S. Census of Housing and Population data and a matched-cities methodology, we compared the brownfields pilot cities to other communities in the United States. We found that regardless of intent, the U.S. EPA program is environmentally just by disproportionately awarding grants to the most economically distressed cities. We also found that the cities that received funding in the early years of the program were more economically distressed than cities receiving the funding more recently