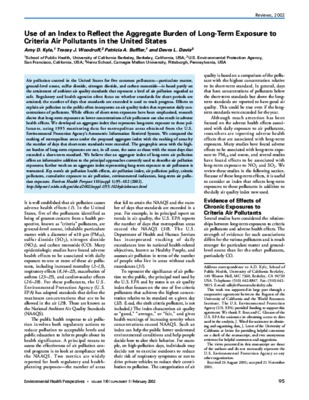 Use of an index to reflect the aggregate burden of long-term exposure to criteria air pollutants in the United States.

Air pollution control in the United States for five common pollutants--particulate matter, ground-level ozone, sulfur dioxide, nitrogen dioxide, and carbon monoxide--is based partly on the attainment of ambient air quality standards that represent a level of air pollution regarded as safe. Regulatory and health agencies often focus on whether standards for short periods are attained; the number of days that standards are exceeded is used to track progress. Efforts to explain air pollution to the public often incorporate an air quality index that represents daily concentrations of pollutants. While effects of short-term exposures have been emphasized, research shows that long-term exposures to lower concentrations of air pollutants can also result in adverse health effects. We developed an aggregate index that represents long-term exposure to these pollutants, using 1995 monitoring data for metropolitan areas obtained from the U.S. Environmental Protection Agency's Aerometric Information Retrieval System. We compared the ranking of metropolitan areas under the proposed aggregate index with the ranking of areas by the number of days that short-term standards were exceeded. The geographic areas with the highest burden of long-term exposures are not, in all cases, the same as those with the most days that exceeded a short-term standard. We believe that an aggregate index of long-term air pollution offers an informative addition to the principal approaches currently used to describe air pollution exposures; further work on an aggregate index representing long-term exposure to air pollutants is warranted