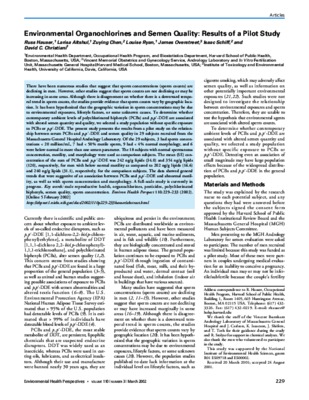 Environmental organochlorines and semen quality: results of a pilot study.

There have been numerous studies that suggest that sperm concentrations (sperm counts) are declining in men. However, other studies suggest that sperm counts are not declining or may be increasing in some areas. Although there is disagreement on whether there is a downward temporal trend in sperm counts, the studies provide evidence that sperm counts vary by geographic location. It has been hypothesized that the geographic variation in sperm concentrations may be due to environmental exposures, lifestyle factors, or some unknown causes. To determine whether contemporary ambient levels of polychlorinated biphenyls (PCBs) and p,p-DDE are associated with altered semen quantity and quality, we selected a study population without specific exposure to PCBs or p,p-DDE. The present study presents the results from a pilot study on the relationship between serum PCBs and p,p-DDE and semen quality in 29 subjects recruited from the Massachusetts General Hospital Andrology Laboratory. Of the 29 subjects, 3 had sperm concentrations < 20 million/mL, 7 had < 50% motile sperm, 9 had < 4% normal morphology, and 6 were below normal in more than one semen parameter. The 18 subjects with normal spermatozoa concentration, motility, and morphology were used as comparison subjects. The mean (SE) concentration of the sum of PCBs and p,p-DDE was 242 ng/g lipids (34.0) and 354 ng/g lipids (120), respectively, for men with below normal motility as compared to 202 ng/g lipids (16.6) and 240 ng/g lipids (31.1), respectively, for the comparison subjects. The data showed general trends that were suggestive of an association between PCBs and p,p-DDE and abnormal motility, as well as with sperm concentration and morphology. A full-scale study is currently in progress