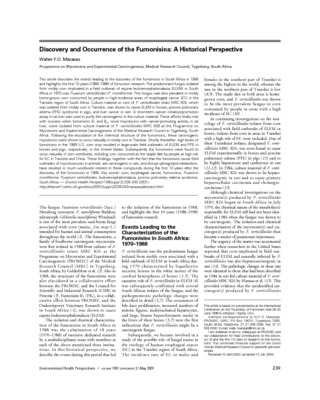 Discovery and occurrence of the fumonisins: a historical perspective.

This article describes the events leading to the discovery of the fumonisins in South Africa in 1988 and highlights the first 10 years (1988-1998) of fumonisin research. The predominant fungus isolated from moldy corn implicated in a field outbreak of equine leukoencephalomalacia (ELEM) in South Africa in 1970 was Fusarium verticillioides (F. moniliforme). This fungus was also prevalent in moldy home-grown corn consumed by people in high-incidence areas of esophageal cancer (EC) in the Transkei region of South Africa. Culture material on corn of F. verticillioides strain MRC 826, which was isolated from moldy corn in Transkei, was shown to cause ELEM in horses, porcine pulmonary edema (PPE) syndrome in pigs, and liver cancer in rats. A short-term cancer initiation/promotion assay in rat liver was used to purify the carcinogen(s) in the culture material. These efforts finally met with success when fumonisins B1 and B2 novel mycotoxins with cancer-promoting activity in rat liver, were isolated from culture material of F. verticillioides MRC 826 at the Programme on Mycotoxins and Experimental Carcinogenesis of the Medical Research Council in Tygerberg, South Africa. Following the elucidation of the chemical structure of the fumonisins, these carcinogenic mycotoxins were shown to occur naturally in moldy corn in Transkei. Shortly thereafter, high levels of fumonisins in the 1989 U.S. corn crop resulted in large-scale field outbreaks of ELEM and PPE in horses and pigs, respectively, in the United States. Subsequently the fumonisins were found to occur naturally in corn worldwide, including corn consumed as the staple diet by people at high risk for EC in Transkei and China. These findings, together with the fact that the fumonisins cause field outbreaks of mycotoxicoses in animals, are carcinogenic in rats, and disrupt sphingolipid metabolism, have resulted in much worldwide interest in these compounds during the first 10 years after the discovery of the fumonisins in 1988