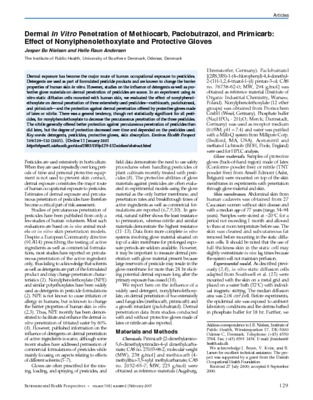 Dermal in vitro penetration of methiocarb, paclobutrazol, and pirimicarb: effect of nonylphenolethoxylate and protective gloves.

Dermal exposure has become the major route of human occupational exposure to pesticides. Detergents are used as part of formulated pesticide products and are known to change the barrier properties of human skin in vitro. However, studies on the influence of detergents as well as protective glove materials on dermal penetration of pesticides are scarce. In an experiment using in vitro static diffusion cells mounted with human skin, we evaluated the effect of nonylphenol-ethoxylate on dermal penetration of three extensively used pesticides--methiocarb, paclobutrazol, and pirimicarb--and the protection against dermal penetration offered by protective gloves made of latex or nitrile. There was a general tendency, though not statistically significant for all pesticides, for nonylphenolethoxylate to decrease the percutaneous penetration of the three pesticides. The nitrile generally offered better protection against percutaneous penetration of pesticides than did latex, but the degree of protection decreased over time and depended on the pesticides used