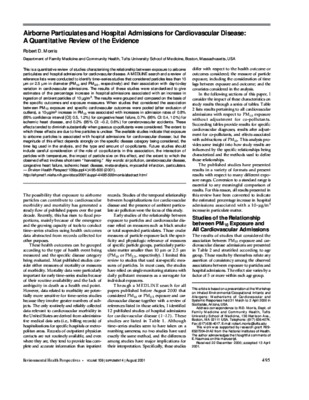 Airborne particulates and hospital admissions for cardiovascular disease: a quantitative review of the evidence.

This is a quantitative review of studies characterizing the relationship between exposure to airborne particulates and hospital admissions for cardiovascular disease. A MEDLINE search and a review of reference lists were conducted to identify time-series studies that considered particles less than 10 microm or 2.5 microm in diameter (PM(10) and PM(2.5), respectively) and their association with day-to-day variation in cardiovascular admissions. The results of these studies were standardized to give estimates of the percentage increase in hospital admissions associated with an increase in ingestion of ambient particles of 10 microg/m3. The results were grouped and compared on the basis of the specific outcomes and exposure measures. When studies that considered the association between PM(10) exposure and specific cardiovascular outcomes were pooled (after exclusion of outliers), a 10-microg/m(3) increase in PM(10) was associated with increases in admission rates of 0.8% (95% confidence interval [CI]: 0.5, 1.2%) for congestive heart failure, 0.7% (95% CI: 0.4, 1.0%) for ischemic heart disease, and 0.2% (95% CI: -0.2, 0.6%) for cerebrovascular accidents. These effects tended to diminish substantially when gaseous co-pollutants were considered. The extent to which these effects are due to fine particles is unclear. The available studies indicate that exposure to airborne particles is associated with hospital admissions for cardiovascular disease; but the magnitude of this effect depends strongly on the specific disease category being considered, the time lag used in the analysis, and the type and amount of co-pollutants. Future studies should include careful consideration of the role of co-pollutants in this association, the interaction of particles with temperature, the impact of particle size on this effect, and the extent to which the observed effect involves short-term "harvesting.