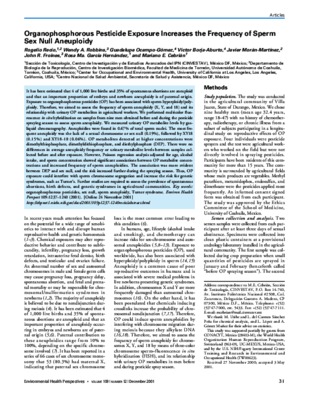 It has been estimated that 4 of 1,000 live births and 35% of spontaneous abortions are aneuploid and that an important proportion of embryo and newborn aneuploidy is of paternal origin. Exposure to organophosphorous pesticides (OP) has been associated with sperm hyperploidy/polyploidy. Therefore, we aimed to assess the frequency of sperm aneuploidy (X, Y, and 18) and its relationship with urinary OP metabolites in agricultural workers. We performed multicolor fluorescence in situ hybridization on samples from nine men obtained before and during the pesticide spraying season to assess sperm aneuploidy. We measured urinary OP metabolite levels by gas-liquid chromatography. Aneuploidies were found in 0.67% of total sperm nuclei. The most frequent aneuploidy was the lack of a sexual chromosome or sex null (0.19%), followed by XY18 (0.15%) and XY18-18 (0.06%). OP metabolites detected at higher concentrations were dimethylthiophosphate, dimethyldithiophosphate, and diethylphosphate (DEP). There were no differences in average aneuploidy frequency or urinary metabolite levels between samples collected before and after exposure. However, Poisson regression analysis adjusted for age, alcohol intake, and sperm concentration showed significant associations between OP metabolite concentrations and increased frequency of sperm aneuploidies. The association was more evident between DEP and sex null, and the risk increased further during the spraying season. Thus, OP exposure could interfere with sperm chromosome segregation and increase the risk for genetic syndromes, such as Turner's. Further studies are required to assess the prevalence of spontaneous abortions, birth defects, and genetic syndromes in agricultural communities