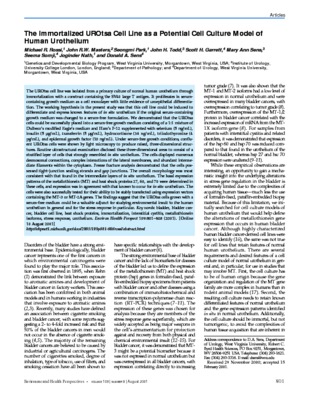 The UROtsa cell line was isolated from a primary culture of normal human urothelium through immortalization with a construct containing the SV40 large T antigen. It proliferates in serum-containing growth medium as a cell monolayer with little evidence of uroepithelial differentiation. The working hypothesis in the present study was that this cell line could be induced to differentiate and express known features of in situ urothelium if the original serum-containing growth medium was changed to a serum-free formulation. We demonstrated that the UROtsa cells could be successfully placed into a serum-free growth medium consisting of a 1:1 mixture of Dulbeco's modified Eagle's medium and Ham's F-12 supplemented with selenium (5 ng/mL), insulin (5 microg/mL), transferrin (5 microg/mL), hydrocortisone (36 ng/mL), triiodothyronine (4 pg/mL), and epidermal growth factor (10 ng/mL). Under serum-free growth conditions, confluent UROtsa cells were shown by light microscopy to produce raised, three-dimensional structures. Routine ultrastructural examination disclosed these three-dimensional areas to consist of a stratified layer of cells that strongly resembled in situ urothelium. The cells displayed numerous desmosomal connections, complex interactions of the lateral membranes, and abundant intermediate filaments within the cytoplasm. Freeze fracture analysis demonstrated that the cells possessed tight-junction sealing strands and gap junctions. The overall morphology was most consistent with that found in the intermediate layers of in situ urothelium. The basal expression patterns of the metallothionein (MT) and heat shock proteins 27, 60, and 70 were determined in these cells, and expression was in agreement with that known to occur for in situ urothelium. The cells were also successfully tested for their ability to be stably transfected using expression vectors containing the MT-3 or MT-2A genes. The findings suggest that the UROtsa cells grown with a serum-free medium could be a valuable adjunct for studying environmental insult to the human urothelium in general and for the stress response in particular