The entry of the SARS coronavirus (SCV) into cells is initiated by binding of its spike envelope glycoprotein (S) to a receptor, ACE2. We and others identified the receptor-binding domain (RBD) by using S fragments of various lengths but all including the amino acid residue 318 and two other potential glycosylation sites. To further characterize the role of glycosylation and identify residues important for its function as an interacting partner of ACE2, we have cloned, expressed and characterized various soluble fragments of S containing RBD, and mutated all potential glycosylation sites and 32 other residues. The shortest of these fragments still able to bind the receptor ACE2 did not include residue 318 (which is a potential glycosylation site), but started at residue 319, and has only two potential glycosylation sites (residues 330 and 357). Mutation of each of these sites to either alanine or glutamine, as well as mutation of residue 318 to alanine in longer fragments resulted in the same decrease of molecular weight (by approximately 3 kDa) suggesting that all glycosylation sites are functional. Simultaneous mutation of all glycosylation sites resulted in lack of expression suggesting that at least one glycosylation site (any of the three) is required for expression. Glycosylation did not affect binding to ACE2. Alanine scanning mutagenesis of the fragment S319–518 resulted in the identification of ten residues (K390, R426, D429, T431, I455, N473, F483, Q492, Y494, R495) that significantly reduced binding to ACE2, and one residue (D393) that appears to increase binding. Mutation of residue T431 reduced binding by about 2-fold, and mutation of the other eight residues – by more than 10-fold. Analysis of these data and the mapping of these mutations on the recently determined crystal structure of a fragment containing the RBD complexed to ACE2 (Li, F, Li, W, Farzan, M, and Harrison, S. C., submitted) suggested the existence of two hot spots on the S RBD surface, R426 and N473, which are likely to contribute significant portion of the binding energy. The finding that most of the mutations (23 out of 34 including glycosylation sites) do not affect the RBD binding function indicates possible mechanisms for evasion of immune responses 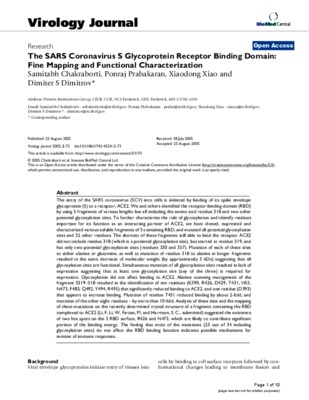