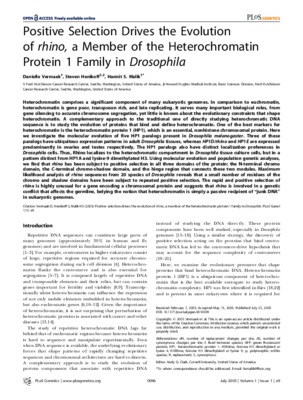 Positive Selection Drives the Evolution of rhino, a Member of the Heterochromatin Protein 1 Family in Drosophila

Heterochromatin comprises a significant component of many eukaryotic genomes. In comparison to euchromatin, heterochromatin is gene poor, transposon rich, and late replicating. It serves many important biological roles, from gene silencing to accurate chromosome segregation, yet little is known about the evolutionary constraints that shape heterochromatin. A complementary approach to the traditional one of directly studying heterochromatic DNA sequence is to study the evolution of proteins that bind and define heterochromatin. One of the best markers for heterochromatin is the heterochromatin protein 1 (HP1), which is an essential, nonhistone chromosomal protein. Here we investigate the molecular evolution of five HP1 paralogs present in Drosophila melanogaster. Three of these paralogs have ubiquitous expression patterns in adult Drosophila tissues, whereas HP1D/rhino and HP1E are expressed predominantly in ovaries and testes respectively. The HP1 paralogs also have distinct localization preferences in Drosophila cells. Thus, Rhino localizes to the heterochromatic compartment in Drosophila tissue culture cells, but in a pattern distinct from HP1A and lysine-9 dimethylated H3. Using molecular evolution and population genetic analyses, we find that rhino has been subject to positive selection in all three domains of the protein: the N-terminal chromo domain, the C-terminal chromo-shadow domain, and the hinge region that connects these two modules. Maximum likelihood analysis of rhino sequences from 20 species of Drosophila reveals that a small number of residues of the chromo and shadow domains have been subject to repeated positive selection. The rapid and positive selection of rhino is highly unusual for a gene encoding a chromosomal protein and suggests that rhino is involved in a genetic conflict that affects the germline, belying the notion that heterochromatin is simply a passive recipient of “junk DNA” in eukaryotic genomes