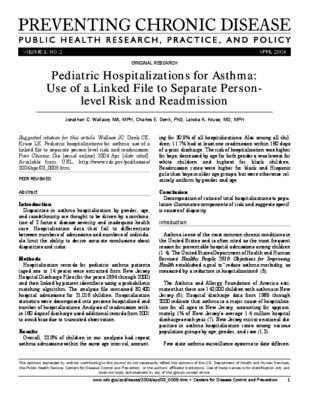 Pediatric Hospitalizations for Asthma: Use of a Linked File to Separate Person-level Risk and Readmission

INTRODUCTION: Disparities in asthma hospitalization by gender, age, and race/ethnicity are thought to be driven by a combination of 2 factors: disease severity and inadequate health care. Hospitalization data that fail to differentiate between numbers of admissions and numbers of individuals limit the ability to derive accurate conclusions about disparities and risks. METHODS: Hospitalization records for pediatric asthma patients (aged one to 14 years) were extracted from New Jersey Hospital Discharge Files (for the years 1994 through 2000) and then linked by patient identifiers using a probabilistic matching algorithm. The analysis file contained 30,400 hospital admissions for 21,016 children. Hospitalization statistics were decomposed into persons hospitalized and number of hospitalizations. Analysis of readmission within 180 days of discharge used additional records from 2001 to avoid bias due to truncated observation. RESULTS: Overall, 22.9% of children in our analysis had repeat asthma admissions within the same age interval, accounting for 30.9% of all hospitalizations. Also among all children, 11.7% had at least one readmission within 180 days of a prior discharge. The risk of hospitalization was higher for boys, decreased by age for both genders, was lowest for white children and highest for black children. Readmission rates were higher for black and Hispanic girls than boys in older age groups, but were otherwise relatively uniform by gender and age. CONCLUSION: Decomposition of ratios of total hospitalizations to population illuminates components of risk and suggests specific causes of disparity