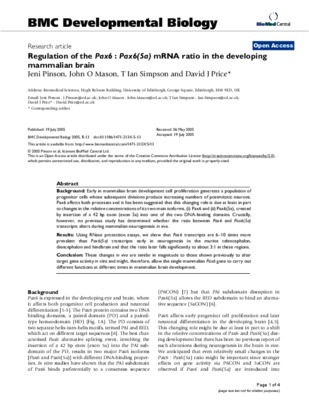 Regulation of the Pax6 : Pax6(5a) mRNA ratio in the developing mammalian brain

BACKGROUND: Early in mammalian brain development cell proliferation generates a population of progenitor cells whose subsequent divisions produce increasing numbers of postmitotic neurons. Pax6 affects both processes and it has been suggested that this changing role is due at least in part to changes in the relative concentrations of its two main isoforms, (i) Pax6 and (ii) Pax6(5a), created by insertion of a 42 bp exon (exon 5a) into one of the two DNA-binding domains. Crucially, however, no previous study has determined whether the ratio between Pax6 and Pax6(5a) transcripts alters during mammalian neurogenesis in vivo. RESULTS: Using RNase protection assays, we show that Pax6 transcripts are 6–10 times more prevalent than Pax6(5a) transcripts early in neurogenesis in the murine telencephalon, diencephalon and hindbrain and that the ratio later falls significantly to about 3:1 in these regions. CONCLUSION: These changes in vivo are similar in magnitude to those shown previously to alter target gene activity in vitro and might, therefore, allow the single mammalian Pax6 gene to carry out different functions at different times in mammalian brain development