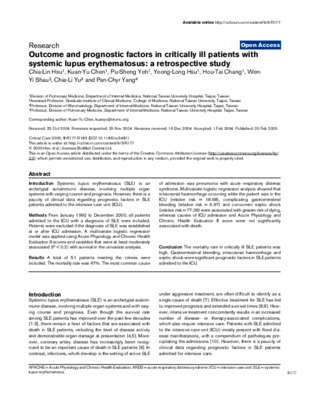 INTRODUCTION: Systemic lupus erythematosus (SLE) is an archetypal autoimmune disease, involving multiple organ systems with varying course and prognosis. However, there is a paucity of clinical data regarding prognostic factors in SLE patients admitted to the intensive care unit (ICU). METHODS: From January 1992 to December 2000, all patients admitted to the ICU with a diagnosis of SLE were included. Patients were excluded if the diagnosis of SLE was established at or after ICU admission. A multivariate logistic regression model was applied using Acute Physiology and Chronic Health Evaluation II scores and variables that were at least moderately associated (P < 0.2) with survival in the univariate analysis. RESULTS: A total of 51 patients meeting the criteria were included. The mortality rate was 47%. The most common cause of admission was pneumonia with acute respiratory distress syndrome. Multivariate logistic regression analysis showed that intracranial haemorrhage occurring while the patient was in the ICU (relative risk = 18.68), complicating gastrointestinal bleeding (relative risk = 6.97) and concurrent septic shock (relative risk = 77.06) were associated with greater risk of dying, whereas causes of ICU admission and Acute Physiology and Chronic Health Evaluation II score were not significantly associated with death. CONCLUSION: The mortality rate in critically ill SLE patients was high. Gastrointestinal bleeding, intracranial haemorrhage and septic shock were significant prognostic factors in SLE patients admitted to the ICU