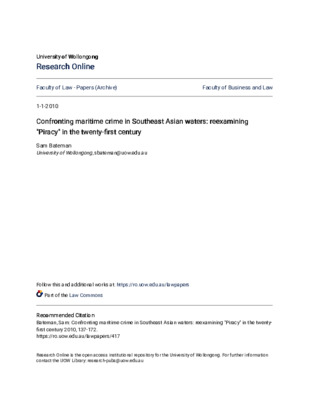 [extract] There is nothing new about maritime crime in Southeast Asia. It has a long history, and the maritime criminals of today are mainly descendants of the marauders, pirates, and bandits of yesteryear. However, changes to the extent and nature of maritime crime have occurred over the years. The decline in fish stocks and loss of access to traditional fishing grounds, along with general economic problems, have led to unemployment and loss of income in coastal villages throughout the region. This has, in turn, forced some villagers to turn to piracy, sea robbery, and other forms of maritime crime. However, these villagers are often just foot soldiers organized by opportunistic businessmen or criminal gangs