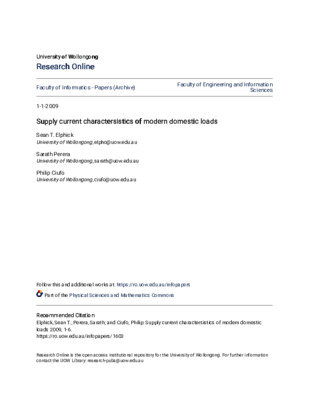 The domestic load is considerably different to that seen 10 to 15 years ago. It has evolved significantly in terms of consumption and characteristics. In addition to traditional resistive and refrigeration type loads, the modern domestic load is now likely to contain a variety of sophisticated devices mostlypowered and controlled by power electronics. This paper examines the power quality characteristics of the modern domestic load. Laboratory testing and mathematical analysis is used to quantify and predict the behaviour of loads operating individually and in parallel. Specifically examined is thebehaviour and variation in harmonic current magnitudes across a variety of loads