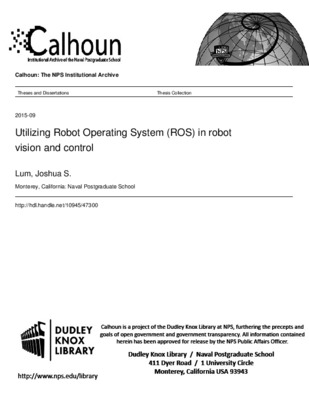 Approved for public release; distribution is unlimitedThe Robot Operating System (ROS) is an open-source framework that allows robot developers to create robust software for a wide variety of robot platforms, sensors, and effectors. The study in this thesis encompassed the integration of ROS and the Microsoft Kinect for simultaneous localization and mapping and autonomous navigation on a mobile robot platform in an unknown and dynamic environment. The Microsoft Kinect was utilized for this thesis due to its relatively low cost and similar capabilities to laser range scanners. The Microsoft Kinect produced three-dimensional point-cloud data of the surrounding environment within the field-of-view. The point-cloud data was then converted to mimic a laser scan. The odometry data from the mobile robot platform and the converted laser scan were utilized by a ROS package for simultaneous localization and mapping. Once self-localization and mapping were achieved, a ROS navigation package was utilized to generate a global and local plan, which translated to motor velocities in order to move the robot to its objective. The results demonstrated that simultaneous localization and mapping and autonomous navigation can be achieved through the integration of ROS and the Microsoft Kinect.Captain, United States Marine Corp