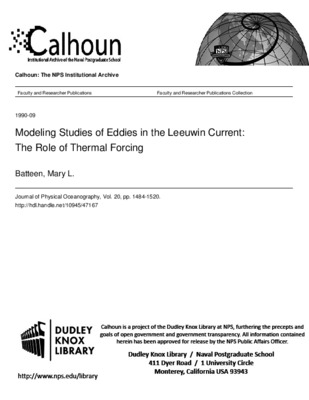 Modeling Studies of Eddies in the Leeuwin Current: The Role of Thermal Forcing

A high resolution, multilevel, primitive equation (PE) model is used to investigate the generation and stability of the Leeuwin Current and eddies off the west coast of Australia. Two numerical experiments are conducted to investigate the roles of the Indian Ocean temperature field and the North West (NW) Shelf waters in generating both the current and eddies. In the first experiment an alongshore temperature gradient, typical of the Indian Ocean temperature field, is imposed, while in the second experiment the additional effects of the NW Shelf waters are considered. In the first experiment, the meridional Indian Ocean temperature gradient is sufficient to drive a poleward surface flow (the Leeuwin Current) and an equatorial undercurrent. The surface flow is augmented by onshore geostrophic flow and accelerates downstream. In the second experiment, the inclusion of the NW Shelf waters completely dominates in the NW Shelf equatorial source region. The effects of the NW Shelf waters weaken away from the source region but they continue to augment the Indian Ocean forcing, resulting in a stronger flow along the entire coastal boundary. The currents generated by the model agree well with the Leeuwin Current Interdisciplinary Experiment (LUCIE) current meter observations obtained during the austral fall and winter, when the Leeuwin Current is observed, and other recent modeling studies. The current is unstable and has significant mesoscale variability. The current forced only by the alongshore temperature gradient is unstable toward the poleward end of the model domain. In this region, barotropic instability tends to dominate over baroclinic instability. When the NW Shelf waters are added to force the current, eddies are generated near the source of these waters (in the equatorward end of the model domain) through barotropic instability of the current. Farther downstream, the NW Shelf waters add strong baroclinicity, which weakens poleward, to the current. Eddies are subsequently generated downstream from the NW Shelf region through both baroclinic and barotropic instability processes. Several scales of eddies are found to be dominant. The forcing by the Indian Ocean leads to eddy growth on scales around l 50 km. With the inclusion of the NW Shelf waters, the wavelength associated with mesoscale variability is around 180 km. Both of these length scales are close to the wavelength associated with a low-mode Rossby radius of deformation. The eddies generated by the model compare well with available observations. This study shows that the Leeuwin Current can be successfully modeled using a PE model forced by the mean climatology. Consistent with the findings of recent modeling studies, a shelf is not required to produce and maintain the current. The mesoscale features which have been missing from previous modeling studies are produced by the model and at scales comparable with available observations