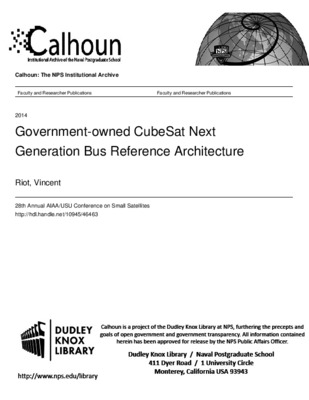 Includes supplementary material.Approved for public release; distribution is unlimitedThe number of CubeSats and small satellites place in orbit has been growing exponentially since 1999 as demonstrated by more than 40 CubeSats being launched in the last quarter of 2013 from the USA alone. While CubeSats were initially used for academic purpose and generally tailored towards technology demonstration, it has become more evident that small satellites can play a role in some operational contexts such as earth observation, space weather, or situational awareness, to name just a few. In the past, each institution involved in Small Satellites has often designed their own proprietary system with regards to communication, software, avionics, and command and control, with incremental improvements based on previous successes. While this may make sense in an academic environment, where it provides students with a wide range of learning opportunities, it distracts teams exploring scientific or operational missions from focusing primarily on the payload technology. Building upon previous work funded by the National Reconnaissance Office (NRO) and known as the Colony I and Colony II bus programs, the Lawrence Livermore National Laboratory (LLNL), in partnership with the Naval Postgraduate School (NPS) is developing a CubeSat bus reference architecture and a set of minimum specifications useful for government applications. The architecture has application to software, electrical, and mechanical interfaces and aims at providing a flexible platform that can be endorsed by industry, supporting interchangeability of components while retaining customization for payload integration. We intend to present the framework of the architecture and its first embodiment in a flat satellite prototype.This work was performed under the auspices of the U.S. Department of Energy by Lawrence Livermore National Laboratory under Contract DE-AC52-07NA27344. LLNL-CONF-655896