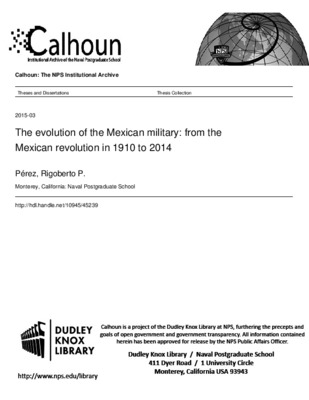 Approved for public release; distribution is unlimitedThis thesis provides a longitudinal review of the Mexican military’s relationship with the state. From 1910 to 2014, the events, rhetoric, and geopolitical representations of the Mexican revolution are assessed in terms of the resulting changes to the military’s mission, role, and organization. The research identifies the revolutionary influence that still remains after the seventy-one year rule of the PRI. Additionally, it discusses some of the historical effects of civilian control within the institution and how the military is controlled under legislative rule today. Furthermore, it provides a review of military policy through the peaceful transition from the Institutional Revolutionary Party, referred as the PRI (Partido Revolucionario Institucional), to the National Action Party, referred as the PAN (Partido Acción Nacional), and back to the PRI in 2012. Finally, it discusses the contemporary Mexican military in terms of how its loyalty and professionalism will propel it into the international scene despite the human rights violations.Captain, United States Air Forc