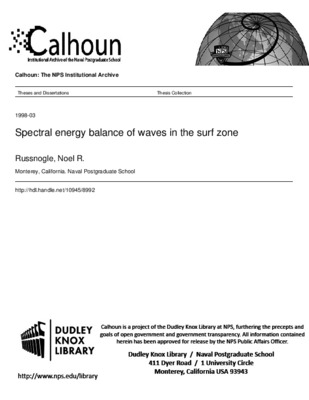 Spectral energy balance of waves in the surf zone

Approved for public release; distribution is unlimitedThe spectral energy balance of waves in the surf zone is examined with extensive measurements from the Duck94 experiment. Cross-shore energy flux gradients are estimated from spectra observed with closely spaced pressure sensors. Nonlinear energy exchanges between different wave components in the spectrum are estimated from observed bispectra based on Boussinesq theory for near-resonant triad interactions. Dissipation of wave energy in file poorly understood breaking process is inferred as the residual term in the spectral energy balance. Analysis of the spectral energy balance shows that large decreases in energy flux observed at the dominant wave frequencies as waves break over a sand bar are closely balanced by nonlinear energy transfers to higher frequencies. That is, the decay of the spectral peak within the surf zone is a result of nonlinear energy transfers rather than direct dissipation. At higher frequencies, observed energy flux gradients are small and do not balance the nonlinear transfers of energy to high frequency components of the spectrum. This analysis suggests that the spectrum is saturated at high frequencies, and thus, file energy that cascades through nonlinear interactions to higher frequencies is dissipated in the high-frequency tail of file spectrumhttp://www.archive.org/details/spectralenergyba00russLieutenant Commander, United States Nav