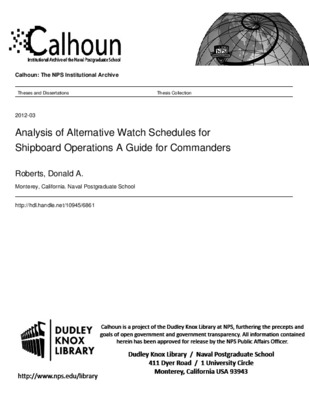 In recent years optimal manning has been implemented on U.S. Navy surface ships where crew sizes have been reduced. This undermanning has resulted in a requirement for sailors to stand longer watches and get less sleep, making for less effective sailors while standing watch. Alternative watch schedules can be used that minimize fatigue of sailors while on watch. The first objective of this study is to analyze a USS San Jacinto crew survey, which compared an alternative watch schedule to more traditional watch schedules. The second objective is to create and analyze various notional use cases of watch schedules to maximize predicted performance while on watch. Crew fatigue is analyzed using the Fatigue Avoidance Scheduling Tool (FAST) program for various cases of notional watch. It was found from the USS San Jacinto survey results that enlisted and officers both preferred the alternative 3/9 watch schedule when compared to other watches that the crew members stood in the past. When comparing the predicted effectiveness while on watch, it was found that the 3/9 watch was best for four section duty, the straight fours was best for three section duty, and the 12/12 watch was best for two section duty.Lieutenant, United States Nav