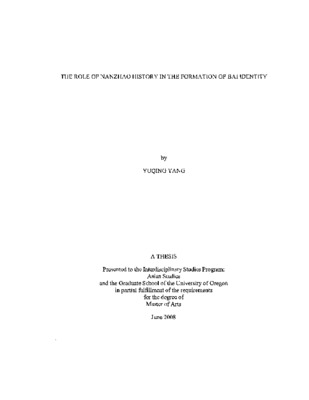 The Role of Nanzhao History in the Formation of Bai Identity

ix, 113 p.Concentrating on the man-made scenery of a theme park in Dali Bai Autonomous Prefecture of China-Nanzhao Folk Island, this thesis explores the way in which the Bai people acquire an identity by sharing a common history that is actively re-created. The state designated minority status of the Bai has been made concrete first by the nationality classification project of the 1950s; then continued by ethnic tourism in the reform era. The history of the ancient Nanzhao Kingdom (649-902) is recounted and reenacted on the Nanzhao Folk Island following the ideological guideline for the creation and preservation of the historical unity of China. The landscape of the Nanzhao Folk Island reveals the interaction between the government's cultural strategy of promoting diversity and the negotiation initiated by the Bai people. The cultural forms on display derived from Nanzhao history are now the resource for a popular reflection of Bai identity.Adviser: Ina Asi