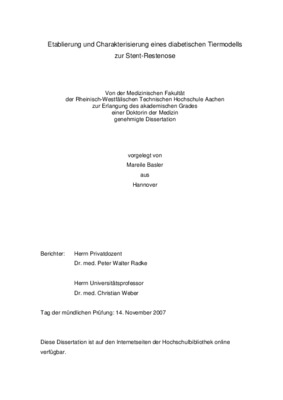 By Mareile Basler
Get PDF (2 MB)

Background : Diabetic patients have a greater risk of developing coronary artery disease as well as restenosis following coronary stent implantation than non-diabetics, despite tremendous advances in the fields of diabetology and invasive cardiology. Surprisingly, no acceptable diabetic animal model of in-stent restenosis has been developed to the present day. The development and evaluation of such preclinical model was the purpose of this study.Methods and results : Fourty-seven New Zealand White Rabbits where fed a cholesterol rich diet. Of these animals, twenty-eight were treated with 50-75 mg/kg Alloxan to induce experimental diabetes. The remaining nineteen animals and three Alloxan-non-responders served as controls. Following an initial endothelium denudation at 12 atm using a balloon catheter, iliacal bare metal stent implantation was performed three weeks after successful diabetes induction. Eight weeks after stent implantation rabbits were terminated before removal of the iliac arteries and histomorphologic analysis was performed. Due to high mortality following diabetes induction and additional perioperative loss, 14 of 25 animals (56%) in the experimental group survived until planned termination. In the control group 16 animals survived (73%). Unexpectedly, diabetic animals developed less neointimal proliferation than the controls (neointimal area 0.88 ± 0.32 mm² vs. 1.83 ± 0.68 mm² in the control group, p<0.05) as well as a lesser degree of restenosis (22 ± 6% vs. 41 ± 15% in the control group, p<0.05). At the same time and contraintuitively, a higher degree of macrophageal infiltration could be shown in the diabetic vessels (24.3 ± 5.89 / field of view vs. 17.44 ± 7.7 / field of view in the control group, p=0.05).Conclusions : Despite of significantly higher inflammatory activity in the neointimal area of diabetic animals, neointimal proliferation is lower in diabetic animals compared with controls. This observation, clearly, is contrary to the well established relation between inflammation and restenosis in humans. Further research is needed to understand the pathyphysiological mechanisms behind these findings. Possibly, macrophageal dysfunction or structural lipoprotein abnormality in the diabetic animals may account for these unexpected findings. Consequently, the hypercholesterolemic diabetic New Zealand White Rabbit does not resemble the pathophysiological mechanisms of stent restenosis in humans