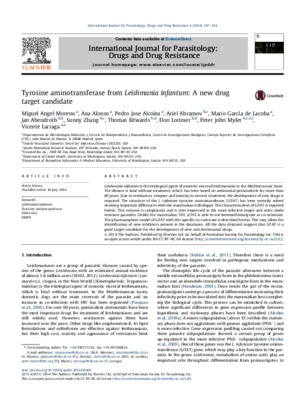 8 p.-5 fig. Moreno, Miguel A. et alt.Leishmania infantum is the etiological agent of zoonotic visceral leishmaniasis in the Mediterranean basin. The disease is fatal without treatment, which has been based on antimonial pentavalents for more than 60 years. Due to resistances, relapses and toxicity to current treatment, the development of new drugs is required. The structure of the L. infantum tyrosine aminotransferase (LiTAT) has been recently solved showing important differences with the mammalian orthologue. The characterization of LiTAT is reported herein. This enzyme is cytoplasmic and is over-expressed in the more infective stages and nitric oxide resistant parasites. Unlike the mammalian TAT, LiTAT is able to use ketomethiobutyrate as co-substrate. The pharmacophore model of LiTAT with this specific co-substrate is described herein. This may allow the identification of new inhibitors present in the databases. All the data obtained support that LiTAT is a good target candidate for the development of new anti-leishmanial drugs.This research was funded under Federal Contract No. HHSN272201200025C from the National Institute of Allergy and Infectious Diseases, National Institutes of Health, Department of Health and Human Services. The project was also funded by grant AGL 2010-21806-C02-01 of the Spanish Ministry of Economy and Competitiveness and by a contract No. 050204100014 by Fundación Ramón Areces.Peer reviewe