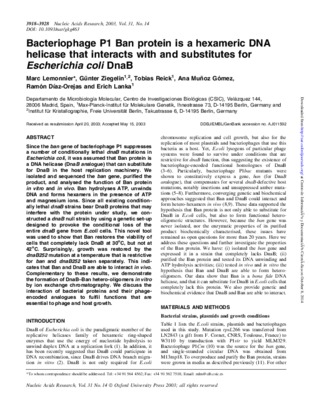 11 p.-9 fig.-1 tab.Since the ban gene of bacteriophage P1 suppresses a number of conditionally lethal dnaB mutations in Escherichia coli, it was assumed that Ban protein is a DNA helicase (DnaB analogue) that can substitute for DnaB in the host replication machinery. We isolated and sequenced the ban gene, puri®ed the product, and analysed the function of Ban protein in vitro and in vivo. Ban hydrolyses ATP, unwinds DNA and forms hexamers in the presence of ATP and magnesium ions. Since all existing conditionally lethal dnaB strains bear DnaB proteins that may interfere with the protein under study, we constructed a dnaB null strain by using a genetic set-up designed to provoke the conditional loss of the entire dnaB gene from E.coli cells. This novel tool was used to show that Ban restores the viability of cells that completely lack DnaB at 30oC, but not at 42oC. Surprisingly, growth was restored by the dnaB252 mutation at a temperature that is restrictive for ban and dnaB252 taken separately. This indicates that Ban and DnaB are able to interact in vivo. Complementary to these results, we demonstrate the formation of DnaB±Ban hetero-oligomers in vitro by ion exchange chromatography. We discuss the interaction of bacterial proteins and their phageencoded analogues to ful®l functions that are essential to phage and host growth.This work was supported by grants from the European Commission grant QLRT-1999-30634 to R.D.-O. and E.L. R.D.-O. acknowledges support by the `Programa de Grupos Estrategicos' (C.A.M.) 2000±2003 and grant BIO99-0859-CO1 from the Spanish MEC.Peer reviewe