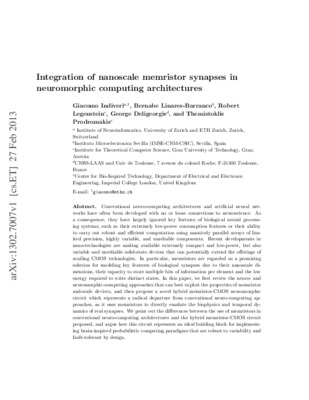 El pdf del artículo es la versión pre-print: arXiv:1302.7007Conventional neuro-computing architectures and artificial neural networks have often been developed with no or loose connections to neuroscience. As a consequence, they have largely ignored key features of biological neural processing systems, such as their extremely low-power consumption features or their ability to carry out robust and efficient computation using massively parallel arrays of limited precision, highly variable, and unreliable components. Recent developments in nano-technologies are making available extremely compact and low power, but also variable and unreliable solid-state devices that can potentially extend the offerings of availing CMOS technologies. In particular, memristors are regarded as a promising solution for modeling key features of biological synapses due to their nanoscale dimensions, their capacity to store multiple bits of information per element and the low energy required to write distinct states. In this paper, we first review the neuro- and neuromorphic computing approaches that can best exploit the properties of memristor and scale devices, and then propose a novel hybrid memristor-CMOS neuromorphic circuit which represents a radical departure from conventional neuro-computing approaches, as it uses memristors to directly emulate the biophysics and temporal dynamics of real synapses. We point out the differences between the use of memristors in conventional neuro-computing architectures and the hybrid memristor-CMOS circuit proposed, and argue how this circuit represents an ideal building block for implementing brain-inspired probabilistic computing paradigms that are robust to variability and fault tolerant by design. © 2013 IOP Publishing Ltd.This work was supported by the European CHISTERA program, via the ‘Plasticity in NEUral Memristive Architectures’ (PNEUMA) project.Peer Reviewe