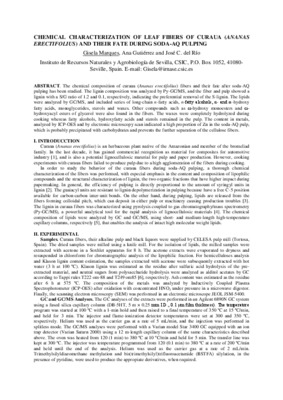 Chemical characterization of leaf fibers of curaua (Ananas erectifolius) and their fate during soda-AQ pulping.

The chemical composition of curaua (Ananas erectifolius) fibers and their fate after soda-AQ pulping has been studied. The lignin composition was analyzed by Py-GC/MS, and the fiber and pulp showed a lignin with a S/G ratio of 1.2 and 0.1, respectively, indicating the preferential removal of the S-lignin. The lipids were analyzed by GC/MS, and included series of long-chain n-fatty acids, n-fatty alcohols, α- and ω-hydroxy fatty acids, monoglycerides, sterols and waxes. Other compounds such as -hydroxy monoesters and -hydroxyacyl esters of glycerol were also found in the fibers. The waxes were completely hydrolyzed during cooking whereas fatty alcohols, hydroxyfatty acids and sterols remained in the pulp. The content in metals, analyzed by ICP-OES and by electronic microscopy scan indicated a high proportion of Zn in the soda-AQ pulp, which is probably precipitated with carbohydrates and prevents the further separation of the cellulose fibers.This study has been supported by the Spanish project AGL2005-01748. G.M. acknowledges an I3P Fellowship from CSIC. We also thank CELESA (Tortosa, Spain) for providing the samples.Peer reviewe