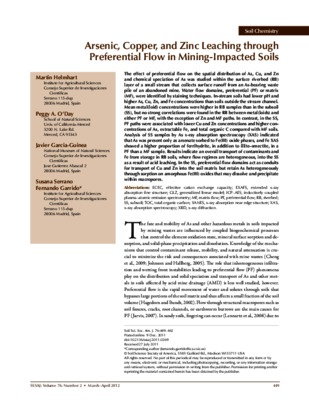 14 páginas, ilustraciones y tablas estadísticas.The effect of preferential fl ow on the spatial distribution of As, Cu, and Zn and chemical speciation of As was studied within the surface riverbed (RB) layer of a small stream that collects surface runoff from an As-bearing waste pile of an abandoned mine. Water fl ow domains, preferential (PF) or matrix (MF), were identifi ed by staining techniques. In-stream soils had lower pH and higher As, Cu, Zn, and Fe concentrations than soils outside the stream channel. Mean metal(loid) concentrations were higher in RB samples than in the subsoil (SS), but no strong correlations were found in the RB between metal(loids) and either PF or MF, with the exception of Zn and MF paths. In contrast, in the SS, PF paths were associated with lower Cu and Zn concentrations and higher concentrations of As, extractable Fe, and total organic C compared with MF soils. Analysis of SS samples by As x-ray absorption spectroscopy (XAS) indicated that As was present only as arsenate sorbed to Fe(III) oxide phases, and Fe XAS showed a higher proportion of ferrihydrite, in addition to illite–smectite, in a PF than a MF sample. Results indicate an overall transport of contaminants and Fe from storage in RB soils, where fl ow regimes are heterogeneous, into the SS as a result of acid leaching. In the SS, preferential fl ow domains act as conduits for transport of Cu and Zn into the soil matrix but retain As heterogeneously through sorption on amorphous Fe(III) oxides that may dissolve and precipitate within macropores.Peer reviewe