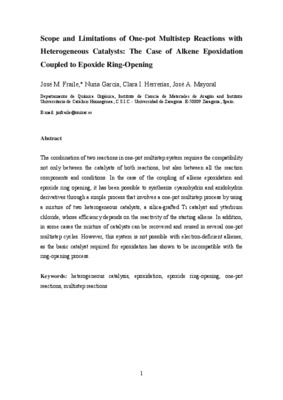 Scope and limitations of one-pot multistep reactions with heterogeneous catalysts: The case of alkene epoxidation coupled to epoxide ring-opening

By José M. Fraile, Nuria García, Clara I. Herrerías and José A. Mayoral
Get PDF (141 KB)

El pdf del artículo es la versión post-print.The combination of two reactions in one-potmultistep system requires the compatibility not only between the catalysts of both reactions, but also between all the reaction components and conditions. In the case of the coupling of alkeneepoxidation and epoxideringopening, it has been possible to synthesize cyanohydrin and azidohydrin derivatives through a simple process that involves a one-potmultistep process by using a mixture of two heterogeneous catalysts, a silica-grafted Ti catalyst and ytterbium chloride, whose efficiency depends on the reactivity of the starting alkene. In addition, in some cases the mixture of catalysts can be recovered and reused in several one-potmultistep cycles. However, this system is not possible with electron-deficient alkenes, as the basic catalyst required for epoxidation has shown to be incompatible with the ring-opening process.Financial support from the Spanish Ministerio de Ciencia e Innovación (projects CTQ2008-05138 and Consolider Ingenio 2010 CSD2006-0003), and the Diputación General de Aragón (E11 Group co-financed by the European Regional Development Funds) is gratefully acknowledged.Peer Reviewe